These Web-based resources — each of which is freely accessible on the Internet — represent a variety of resource types, ranging from sites authored by serious medieval scholars to those created and maintained by dedicated hobbyists.  What they have in common is significant coverage of one or more aspects of The Mabinogion.

Created by self-described digital medievalist Lisa Spangenberg, this website represents an effort to provide a variety of resources about Celtic studies, with a focus on the medieval period (and earlier years).  The types of resources offered include a Reading List (described as “scholarly in nature” but also including a list of books comprising a “Celtic studies starter kit”), Opinionated Celtic FAQs, Celtic Web Resources, and (Book) Reviews.  A search of the site using the term “mabinogion” yielded 14 results, including a lengthy FAQ entry What is the Mabinogion? and an Arthurian Bibliography that includes considerable discussion of the role played by The Mabinogion in the Arthurian legend.

As mentioned on the the text itself page of this pathfinder, Will Parker published one of the two most recent Welsh-to-English translations of The Mabinogion text.  Related to that effort, he has created and maintains the following two websites: 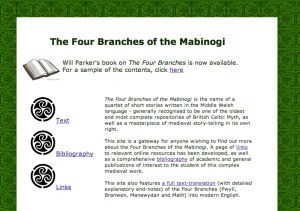 Designed to be a “gateway” of sorts, this site provides a link to the full text of Will Parker’s Mabinogion translation, followed by a bibliography page (which includes both a comprehensive bibliography and a lengthy bibliographic essay), and a page of selective links to relevant online Mabinogion-related resources.

The purpose of this website is quite different from that of Parker’s sister site described above (mabinogi.net).  On this site, Parker has collected a series of lengthy academic articles on each one of The Mabinogion tales, including not only a discussion of the thinking of others, but also his own ideas.  He also provides a discussion of the significance of oral lore in the creation of the tales. 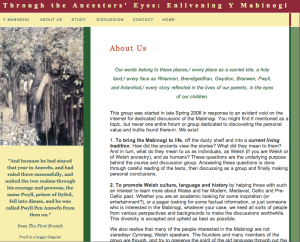 This website is essentially an online study group begun in 2008 and dedicated to serious (though not exclusively academic) study of The Mabinogion.  The founder, Jennifer MacCormack (a Welsh student working on her BA in Welsh studies, with a passion for all things Mabinogion), began the group in response to what she considered to be a “void on the internet for dedicated discussion of the Mabinogi.”  Though anyone may join, the site does require registration in order to participate in the discussion groups, which operate on three levels: basic (for newbies), academic (the intellectual side), and deep or spiritual (which explores the deeper meaning of the tales).  In addition to the discussion page (accessible only by registration), the website has a Recommended Resources page. 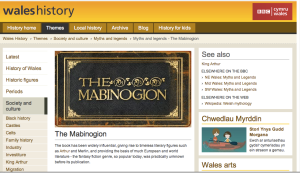 The British Broadcasting Corporation (BBC) website has a section devoted to Wales history, a portion of which includes  a series of articles providing basic information about The Mabinogion.  The articles are a good resource for researchers who are new to The Mabinogion, as they provide basic  information about the two Mabinogion manuscripts, the history of the tales, and the stories themselves.

TimelessMyths.com is a hobbyist website created and maintained by a fantasy fiction enthusiast, and devoted to medieval mythology in Europe.  The Celtic mythology portion of the website has two sections that may be of interest to Mabinogion researchers: (1) a very lengthy page devoted to the Mabinogion tales, and (2) a page with information about Welsh deities, most of which are derived from the first four tales of The Mabinogion.  This page also has a list of names of characters who appeared with the Welsh Arthur in five of the Mabinogion tales, along with links to the relevant characters in the Arthurian Legends portion of this website.

Middle Welsh is the language used in the writing of The Mabinogion and other Welsh folk tales.  Reading Middle Welsh is a website the sole purpose of which is to make freely available online a book of the same name written by Gareth Morgan, a transplanted Welshman who was Professor of Classics and Education at the University of Texas at Austin (where he taught Middle Welsh) before his death in 1996.  Professor Morgan died before he could finish the book (it was 95% complete) or arrange for its publication.  However, an endowment fund established in his name decided to make the book available online.  The book is designed to introduce and practice “the forms and structures used in the first story of the Mabinogi” and it “culminates in a reading of that story (complete and unchanged) in a standardised spelling close to that of Modern Welsh.” 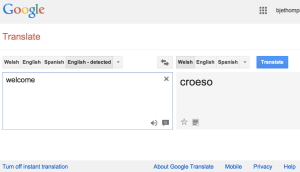 If you are not already familiar with Google Translate, it is a very useful tool for translating words or phrases from one language to another — including from English to Welsh (or Welsh to English).  It also allows you to translate an entire web page or document by uploading the document or dragging and dropping the website’s url onto the Google Translate page.